This article shows two key visual intuitions behind the usage of a discount factor in reinforcement learning with image, code, and video.

Most of the advances in science and technology happened in the last 100 years. We can see mind-boggling progress in automotive, medicine, communication, energy, etc. . Among these advances, some technologies shake and reform every other. For example, computers penetrated every other field, catalyzed, and reshaped the way they are now.

I often think it is the generic nature of those inventions that make them so lethal. After computers and the internet, the potential revolution is going to be Artificial General Intelligence (AGI).

Algorithms that are capable of doing specialized tasks are already part of our life. For example, recommendation systems help us in retail, finance, media, etc.. We have algorithms good with language translation, speech recognition, automated driving, etc. In general, Machine Learning (ML) algorithms leverage patterns in data to make reliable predictions and create value. All of this happened because we accumulated a massive amount of data that resulted from the computing revolution.

In Reinforcement Learning (RL), the agent learns from trial and error. RL theory formulates the problem such that the agent gets incentives to achieve a goal.

Please note that it is also possible for the session to continue infinitely (i.e., $n\to\infty$). The task for the agent is to collect as many high rewards as possible. Mathematically it is represented as the sum of all rewards $R_{t}+R_{t+1}+R_{t+2}+…+R_{t+n-1}$.

You might recognize this as in the form of a mathematical series (addition of a series of infinite numbers). Mathematical analysis is a branch of mathematics (like trigonometry, calculus, linear algebra) that studies such objects.

However, in the infinite session case, an additional challenge is that the sum of rewards keeps growing. This problem is known as unboundedness in mathematical terms. We can’t deal with such unbounded functions/signals computationally. And we need a solution for this.

The discount factor (a number between 0-1) is a clever way to scale down the rewards more and more after each step so that, the total sum remains bounded. The discounted sum of rewards is called return ($G_t$) in RL. 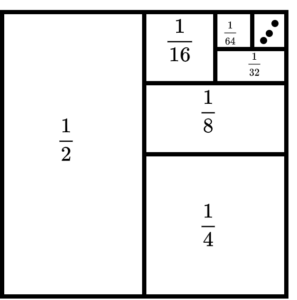 Here each term or rectangle here is half of its preceding one. As you can see the limit of such an infinite sum of such terms will be 1 in this example. In this specific example, the ratio between successive terms was $\frac{1}{2}$. And we were lucky to represent such a pattern in visual form.

Likewise, the series of gammas forms a geometric series. Here the ratio between two consecutive terms is $\gamma$ itself. The sum of such gamma series generalizes to a solution as shown below.

This makes sure that even if the reward remained high and consistent (for example $R$) at every step, the cumulative discounted sum of it will be bounded.

Other than making the return bounded, it got one additional advantage as well. It can adjust the behavior of the agent to focus on long-term goals or short term. For example, if we assume that $\gamma$ was 0, we can see that all terms in the above equation, except the first one, go to zero. This means now the focus of the agent will be on the immediate reward only and not on long term rewards.

The change of weights is shown in the video below.

As you can see, for small values of $\gamma$ near to zero, high weightage is only applied to immediate rewards. As $\gamma$ reaches near to 1, remaining terms start to get high weightage.

The discount factor helps in making the cumulative sum of rewards bounded and can also adjust the agent’s behavior to achieve long term goals. We will see more concepts of reinforcement learning in upcoming articles.